Between Barack and three hard places

A conspiracy theory to cover up a terrorist attack, tax investigations into the finances of political enemies, secretly stolen information from members of the press…

Are we in some kind of a movie?

If you’re a political junkie like me, you’e loving the back and forth. And if you’re President Obama, you’re wanting it all to be over.

Just this week, three scandals have come to a head.

You’ve heard of the Benghazi investigation before, no doubt, but new hearings held by House Republicans have gone surprisingly well, eating up tons of news coverage that the President was hoping to devote to other interests. The White House has been quick to point out that “there’s no there there” in any of the new testimony, most of which was rehashed from earlier discussions. That will probably persuade most of the public to ignore the issue (an all-time low of 44% say they’re still following the Benghazi investigation), but it highlights the impact of the two other ongoing scandals – the GOP is even less likely to let the matter drop while they keep the administration on its back foot.

The IRS scandal has the most potential for damage

The IRS controversy will keep it there for some time. This scandal broke last Friday, when IRS official Lois Lerner suddenly and deliberately apologized for the IRS’s improper targeting of Tea Party groups seeking tax-exempt status out of the blue. Instantly, all the whining about unfair targeting by the IRS from Tea Party Patriots was completely justified. And their suspicious outlook on government? Even more so. Politically, this scandal has the potential to become the most damaging for big-government liberals like the President, because it validates his opponent’s worldview.

That’s not to say that the secret access of reams of confidential information by the Justice Department is unimportant or irrelevant. Quite the contrary. This third scandal is all about the DOJ reading and copying two months of internal Associated Press documents – without telling anyone. As a result, the identities of confidential government sources for AP reporters are now in the hands of the Obama administration.

Could the Justice Department do this to other news networks? Could it spy on reporters for perceived enemies like Fox News? Has it already done so? Questions like these are why Republicans and Democrats alike are condemning the raid as an attack on freedom of the press. Think about it – if you were a confidential source in the government, would you call the press to report something you thought was wrong, knowing that now the Justice Department is probably watching you? 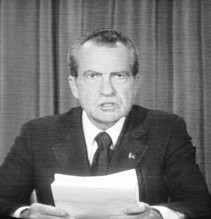 Unless a connection to the President is proven, these scandals won’t lead to impeachment

Maybe outing of some of their last sources of information from inside the administration has finally caused the media to snap. Aloof Obama and the hungry press do not get along well, despite what Rush Limbaugh may have told you. These scandals have given the press the perfect opportunity to lash out and vent some anger. As sweet as that may sound to many a riled conservative, consider it also means these stories are probably over-hyped.

The Benghazi narrative is coming to a close. With no new information to fuel the fire, it will probably die out. The AP story will likely last a few weeks at most, because most Americans don’t like reporters, and they like leaks even less. The IRS scandal is the most dangerous of all, because everyone hates taxes and everyone fears a government that tries to use them as a weapon against enemies – exactly the thing Republicans have warned about for years. Yet this too shall pass, probably in a month or so.

Of course, that’s little comfort to the President, who’s never had to deal with this many major scandals at the same time. Until he pays his penalty, his administration will be stuck between Barack and three hard places for the days ahead.

3 comments on “Between Barack and three hard places”